When Tessearact Hyper Gunner developer Rachid Abdul sent over details on their retro-inspired HTML5 Game Tesseract Hyper Gunner, I noticed it had been built on Scirra’s Construct 2 HTML5 Game Builder and asked for his thoughts on the Construct2 platform.

You can read the full details below, but I think this last paragraph sum’s up his experience pretty well, and before you asked, I double checked, and he doesn’t work for Scirra 🙂

What do i think of Construct 2? Fricken awesome thats what i think. Scirra is constantly releasing updates to it (didn’t help me too much lol, but this is still a good thing), and even regularly engages with the users on forum which i think is awesome. Construct 2 has got to be one of the easiest game development tools to use and probably the fastest for anyone to pick up and make a game right away without much effort.

Here’s a breakdown of Abdul’s full response (these are all Abdul’s words, not mine):

“What drove me to take interest Scirra’s Construct 2 was the recent (already over) HTML5 Game Competition conducted by Pokki. Needless to say, i didn’t quite get our entry submitted…but thats a different story. So me and a buddy of mine came up with a game concept that took elements of popular games action/arcade style games of the past and combined it all into one. Now we just needed something to build it with. I was already aware of several HTML5 development tools but knew we didn’t have much time so we needed something that can help us get it all done in the most efficient manner. Being that Construct 2 takes more of a visual approach to game development, i decided to go with it and I’m very happy that we did.”

On getting started with Construct 2:

“Without knowing much about how it worked and just tinkering with the provided examples, I was able to put together a rough prototype within a matter of days. Matter of fact, Tesseract was literally built off of the platform jump-through example and there’s still bits and pieces from it still in the game right now :). Since we knew from the get go that Tesseract was going to be a fast paced action shooter with many objects moving around at once, my concerned was the rendering speed of HTML5 and if it can handle this type of game. So once again, Construct 2 allowed for Web GL to be used and it made it run great, even on full screen with tons of physics pieces flying all over the place which is quite impressive. It turned out well so we went full steam with the development each night. Jorge did most of the graphics, while i focused on the development itself. Construct 2 had an interesting set of pre-built “behaviors” that you assigned to each game object on screen. This particular aspect saved me *a lot* of time, allowing me to focus on gameplay rather than the mechanics of the game.

What intrigued me the most with Construct 2 was that everything i attempted to build on it, just “worked” and anything that didn’t quite work the firs time around eventually did not too longer afterwards due to Construct 2’s very intuitive event based system. For example, we first started out by moving the “Guardian” around the screen, getting him to aim properly with the mouse, and having him jump from platform to platform and getting the animations and controls to feel right. This was made incredibly easy in Construct 2. Then we focused on creating the weapon the Guardian was shooting and eventually evolved it into a robust weapon system of 6 different types of guns that each fired its own unique bullets. I really had a great time experimenting with all the kinds of guns we could make. My favorite one was the Reflector, which was based off of one of the weapons from Bangai-O. And for anyone who is truly familiar with Bangai-O may noticed some other similar elements in Tesseract :). Creating the enemies was also extremely easy especially since they all more or less followed the same movement patterned, which each containing their own separate attributes. Laying out the pieces to build and populate each level was made incredibly simple and i don’t think there’s a more robust integrated layout editor than the one Construct 2 uses. Not to mention the other plugins that can let you modify the system itself. I can honestly say that there weren’t really many road blocks that i ran into during the development process. We managed to get the Tesseract completed from start to end in roughly a 6 weeks using Construct 2.”

On any issues with Construct 2:

“Now, while i do have so many praises for Construct 2, its not without its issues. While the editor itself its great, there’s been a few times it randomly crashed on me. Luckily i didn’t lose too much work. But this is typical of many other editors too so i’m not too surprised by it. There is something quirky with the animation system in Construct 2 and i can’t quite figure out what it is. Its the reason why not all the guns in Tesseract are animated like they’re supposed to be. The event-based system of development can definitely save tremendous amount of time, however, about half way through the development cycle i began to noticed a lot of redundancies which i don’t think can be avoided with this type of system. I’m also thinking that i can probably *code* the game (if had a robust layout editor along with it) a lot quicker too had i done this in code that by “dragging and dropping” (note that i said the word *code*, not develop which is two different things).

But the main issue i had was that when I updated Construct 2 to release version 79…it totally crapped out everything in the game to the point where it was unplayable. I didn’t bother to spend too much time debugging the issue but reverted back to release 78 and continued with the development. Perhaps later on i may look into whats causing it and make the changes.”

“Importing graphics into Construct 2 was made extremely easy. The graphics for the Tesseract Hyper Gunner were created using the Gimp 2.6.7 graphics editor. There were two different graphical requirements for the creation of the game: the level creation for the stages, and the game characters. The level creations varied from single layered, to multi-layered background images of .png format. For the individual game characters, the graphical images were required to work in the pixel scale in order to obtain the desired result. The character images were originally drafted in blue colored outline, followed by a second final outline done in black. Once the outline was complete, color was added to the characters. Lastly, the characters were animated via the Playback feature which is available within the Gimp graphical editor. All the sprite frame was then imported into a Sprite object in the game, and bounding boxes were easily set for each sprite.”

On Sound in Construct 2:

“When i began working on adding sound and music to Tesseract, it came to my surprised that when media is imported into Construct 2, it created a .M4A and .OGG version of it. This is so that it can fully support all the browsers. So thats great and all but it ballooned the size of the project up big time. Not sure if I like that, however i do agree that this is necessary for full compatibility in all current browsers. Also some issues with the music buffer as it doesn’t seem to stop/play music too well…but i think this could also be related to HTML5 altogether. Ozzed re-worked the music again to shrink the files down even more but it only just helped the issue a little. We’re still working on this.”

“So to sum it up, what do i think of Construct 2? Fricken awesome thats what i think. Scirra is constantly releasing updates to it (didn’t help me too much lol, but this is still a good thing), and even regularly engages with the users on forum which i think is awesome. Construct 2 has got to be one of the easiest game development tools to use and probably the fastest for anyone to pick up and make a game right away without much effort. The future for it is very bright and will definitely bring more spotlight to HTML5 gaming. Highly recommended, so get it now. NOW.”

So check out Rachid and Jorge’s Tesseract Hyper Gunner, and, based on Rachid’s feedback it’s certainly worth giving Construct 2 a look. 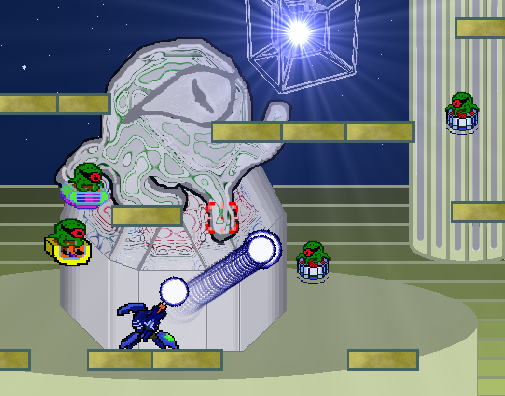