With Google I/O wrapping up today, I thought it a good time for a wrap up post of what the takeaways about where HTML5, and particularly HTML5 Game Development is heading from a Google-centric perspective.

While Google’s perspective isn’t the only one out there, given Chrome as the current browser of choice of most developers as well as one of the most successful monetization platforms (with the Chrome Web store) of HTML5 to date, its worth paying attention. As was also pointed out, according to Google’s numbers Chrome is now the number one browser in the world and so where Chrome goes so goes the web.

There were a number of HTML5 focused parts of the keynotes – primarily in day 2, with the primary points being driven home were that games, since about a year ago, have become a focus of the Chrome team. To quote:
“Why? Games tend to really push the platform. If you can run games you can run anything else. So we talked to game developers and found out what APIs they need. A lot of it was what we were already working on. And we started adding them to Chrome.”

This is a point that was repeated in various forms by various speakers and members of the Chrome team, so it seems to be pretty well an agreed-upon perspective at Google.
Head of Chrome and Apps Sundar Pichai briefly showed a visualization of the history of the of web.

The interactive visualization is up at EvolutionOfTheWeb.com and is a lot of fun to play around with – especially looking at what the older browsers looked like and how far we’ve come.
Sundar also showed the cloud streaming platform Gaikai running Bulletstorm straight in the browser, running Native Client however, not HTML5. (Better image coming when I get to a better internet connection)

The also talked about the Chrome web store, and how the HTML5 version of Angry Birds has been played by more than 150 million people and there have been over 750 million app installs from the store since it’s launch.

Next there was an example of a Cirque du Soleil app that was built entirely using 3D transforms and CSS – while not ground-breaking it was pretty darn cool stuff. 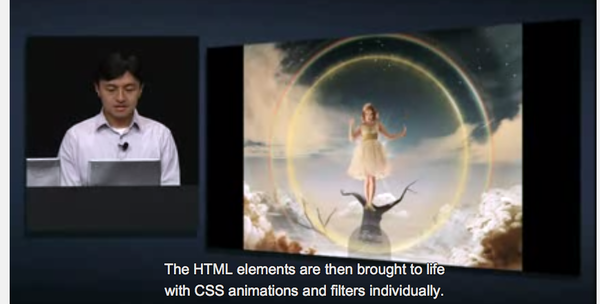 All this was shown running on a Chromebook – full 3D on a low-end computer running in the browser isn’t anything to shake a stick at.

The other big browser news was the launch of Chrome for iOS. This was tempered by the fact that this is still just a supped-up version of UIWebView due to Apple’s restrictions.

Finally Google put together a video recapping the launch and progression of chrome:

There were a number of cool HTML5 pieces on display on the show floor in the 2nd floor Chrome area.

As our designer (@artimated) and I (@cykod) had built FingerForest, one of a first crop of HTML5 Mobile experiments – I worked the Chrome Mobile experiments booth for a few hours Wednesday and Thursday and had a blast talking to people about HTML5 and what you can do natively in the browser these days. 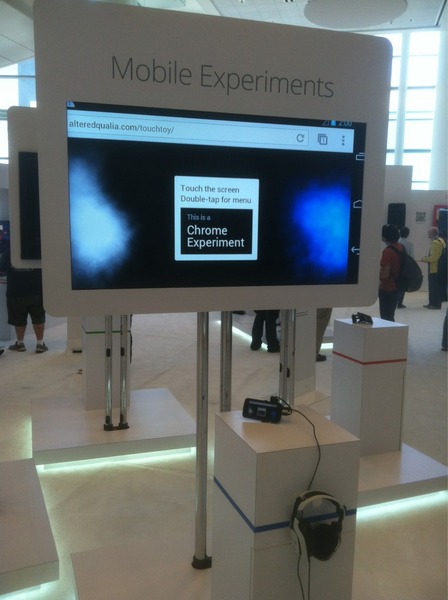 You can view the experiments in Chrome for Android on your ICS or Jelly Bean devices at ChromeExperiments.com.

One of the cool features of Strike fortress is that if you pull it up on a mobile device, while you can’t play the 3D game you can play in a support role using a canvas-based 2D map to drop health packs and bombs on the desktop players.

Disney was there the second day showing off its HTML5 game Agent P. Agent P was built on the HTML5-based engine Disney has built internally, based on the technology acquired by purchasing Rocket Engine. 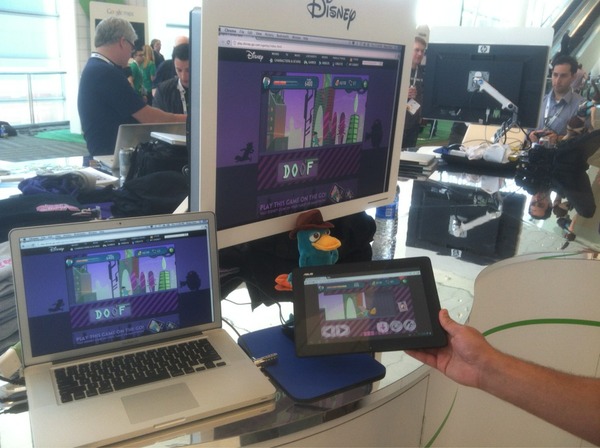 The game is playable on just about any performant HTML5 device.

There were a number of sessions in the Chrome track that should be of interest to HTML5 game developers. Since Google was kind enough to make these available online – you should definitely check them out.
The sessions I’d recommend in particular are:

Check out developers.google.com/live for the complete set of talks (Day 3 talks aren’t posted yet)

If you’re only going to watch one, check out the GRITS talk. GRITS was an internal 20% project that uses WebSockets and Socket.io to build a real-time multi-player game. Lots of good ideas about how to send packets over the wire with WebSockets and doing client-side prediction.The code is also up on Google code and playable online

Probably the highlight of the conference for me was the Chrome mobile summit. This was an intimate invite-only event that was basically a Q and A with the Chrome mobile development team. No question was off-limits and the back and forth got pretty animated.

Some of the key take-aways:

While HTML5 was only a small part of the discussion at Google I/O (along with Android, Jelly Bean, Project Butter, Project Glass, Google Compute Engine, BigQuery, …) Chrome and the browser are such a big part of what Google does that everything came back to the browser in some way or another.

Almost off-handedly, one of the Chrome mobile leads said something along the lines of “well in 10 years, everything will get launched instantly from the browser.”

The browser is here to stay and Apps, at least native Apps, aren’t the future (or at least, not the whole future)

The browser is so integral to Google’s strategy that the amount of effort Google is sinking into Chrome, with the goal of owning the browser and pushing HTML5 makes a lot sense. This bodes well for game developers throwing their hat into the HTML5 Game Development ring for the first time. While, as many people have said, it may take a few years – HTML5 is going to be a dominant force in gaming in the future.